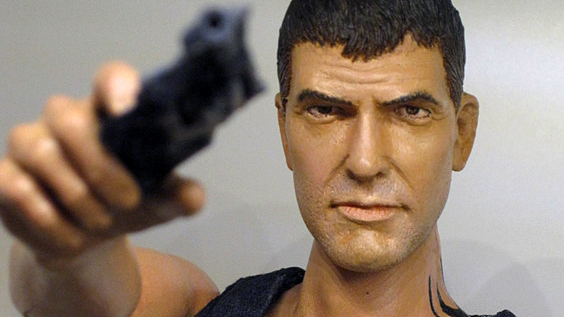 George Clooney’s first major Hollywood film was also one of his best: 1996’s From Dusk Till Dawn co-starring Quentin Tarantino and directed by Robert Rodrigues (Desperado, Sin City).   I’ve wanted a 1:6 scale action figure from it ever since I saw it – over 15 years ago!  My skills and the availability of civvie parts in this hobby have both finally progressed to the point where I can create a figure that doesn’t look like total crap.   I find it surprising that 1:6 manufacturers still haven’t created a great George Clooney sculpt.  For my custom figure, I used a head from an old Three Kings headsculpt set and customized it to look more like the young Dusk Til Dawn Seth Gecko Clooney.   It could still be better, but it will have to do for now.

Apologies for the vanilla pix. One day I’ll make a base for this and try to shoot something tricked out as is the fashion now.