Know, O prince, that between the years when the oceans drank Atlantis, and the years of the rise of the Sons of Aryas, there was an Age undreamed of, when shining kingdoms lay spread across the world like blue mantles beneath the stars. Hither came Conan the Cimmerian, black-haired, sullen-eyed, sword in hand, a thief, a reaver, a slayer, with gigantic melancholies and gigantic mirth, to tread the jeweled thrones of the Earth under his sandalled feet.

One of my fondest memories growing up was hanging out with an older neighborhood kid and reading his stash of Savage Sword of Conan comics. I’d sit there reading for hours and be totally captivated by the incredible art, exotic characters, and savage (way too savage for a little kid really) stories. They blew my young mind. Now that I’m old and sotted, I sometimes get that nostalgic yearning for simpler times, and a Conan figure hits that sweet spot between nostalgia & my current hobbies (1:6 figures). Though there are plenty of Arnold movie Conans out there, I was determined to create a fantasy-painting-style Conan figure to commemorate those fond times. A tip of the hat to Joe Jusko, John Buscema, Earl Norem, and all of the other artists who so vividly brought Conan to life and who inspire me to this day!

MY PHILOSOPHY ON MAKING A CONAN FIGURE

Anyways, I’ve worked on some form of this figure for over 5 years. It’s gone through many iterations, originally being much more cartoony, but the current iteration was done in the last 2 years. In that time, I learned to sculpt and paint better and even do light 3D CAD work to solve customization issues. Those in turn have opened up the possibilities of customizing for me (teach a man to fish & all that). I hope that you like it.

(Sorry for the hodge podge pictures. I really need to setup a proper photo station & get a good SLR 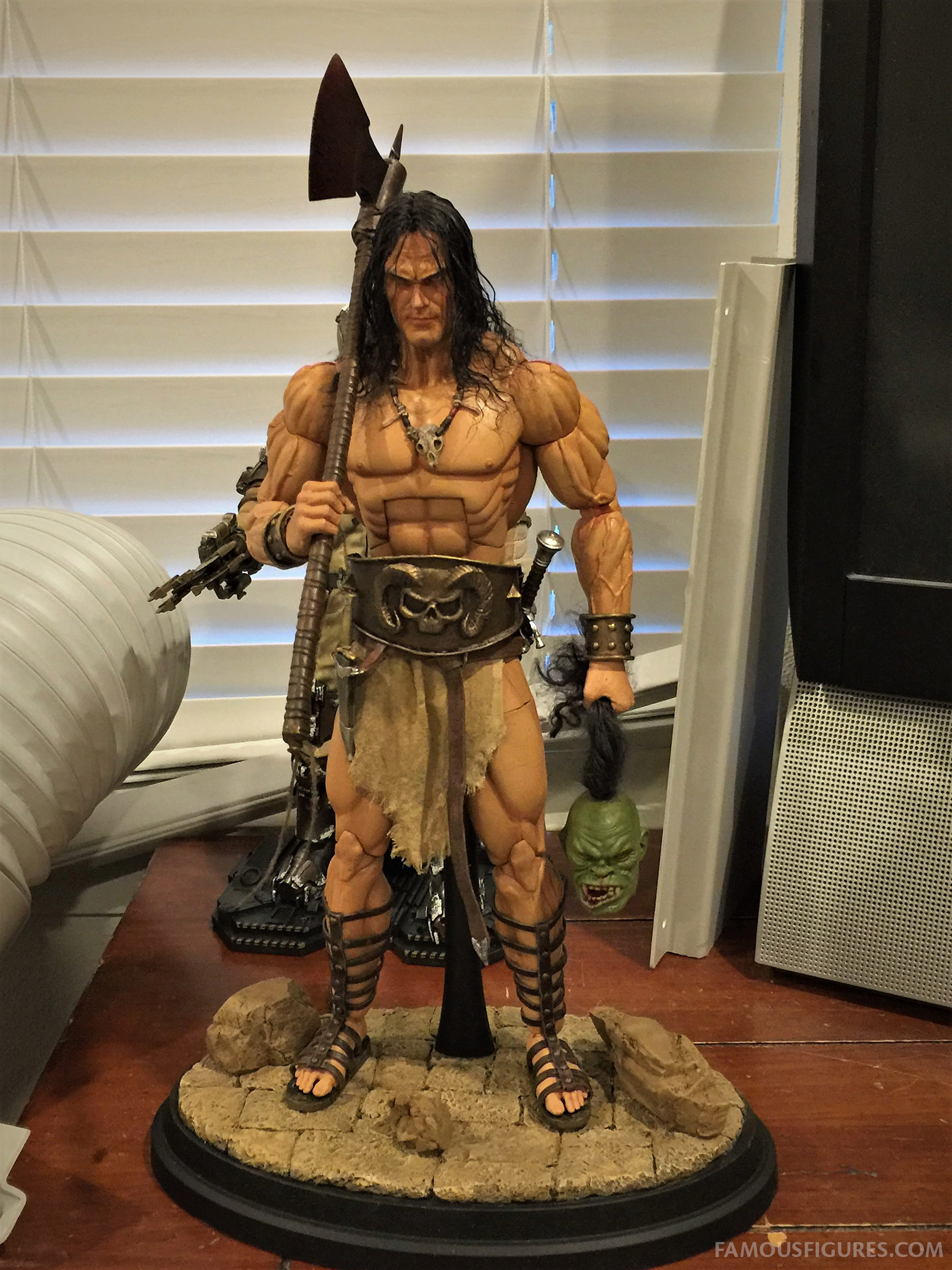 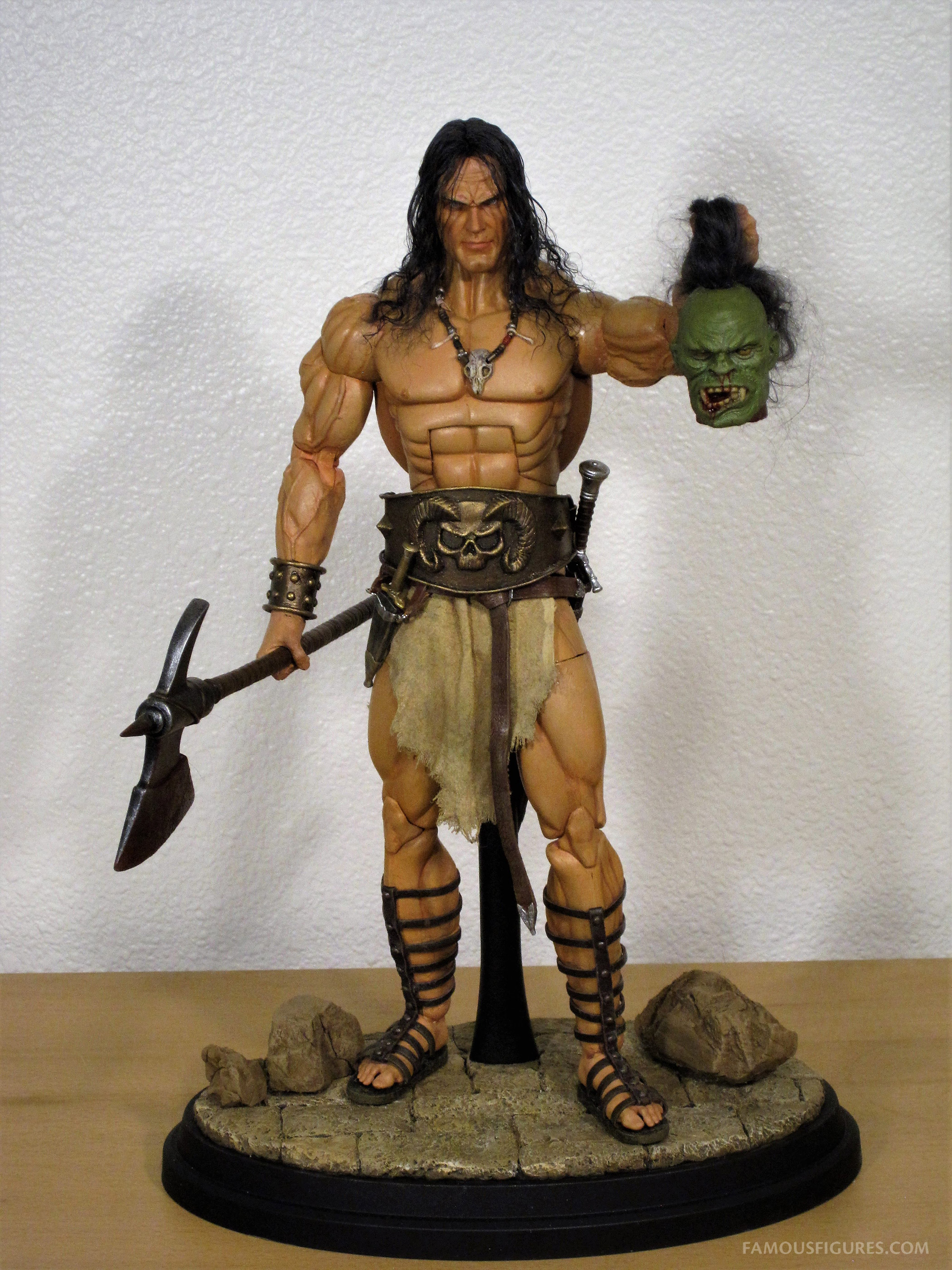 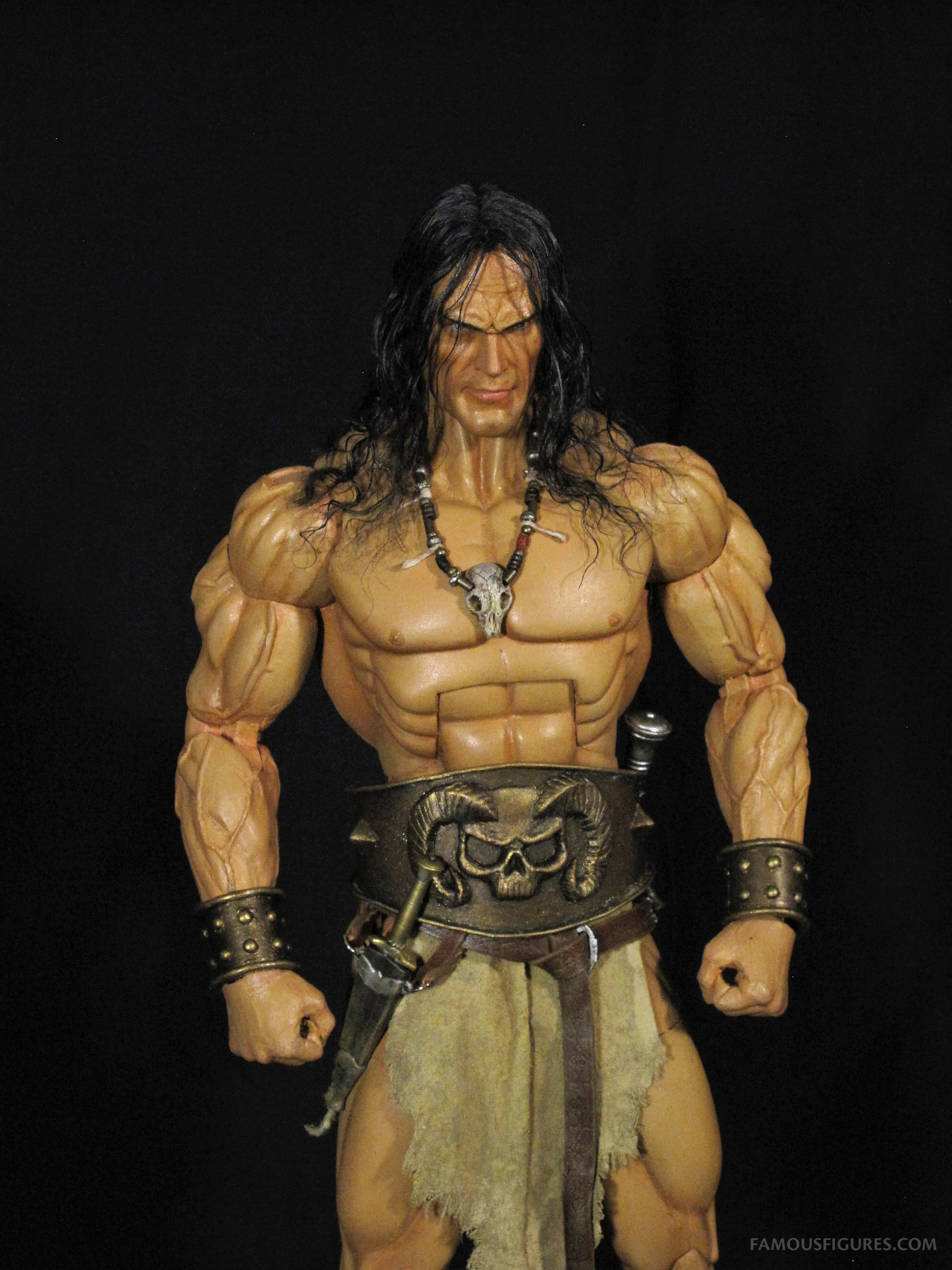 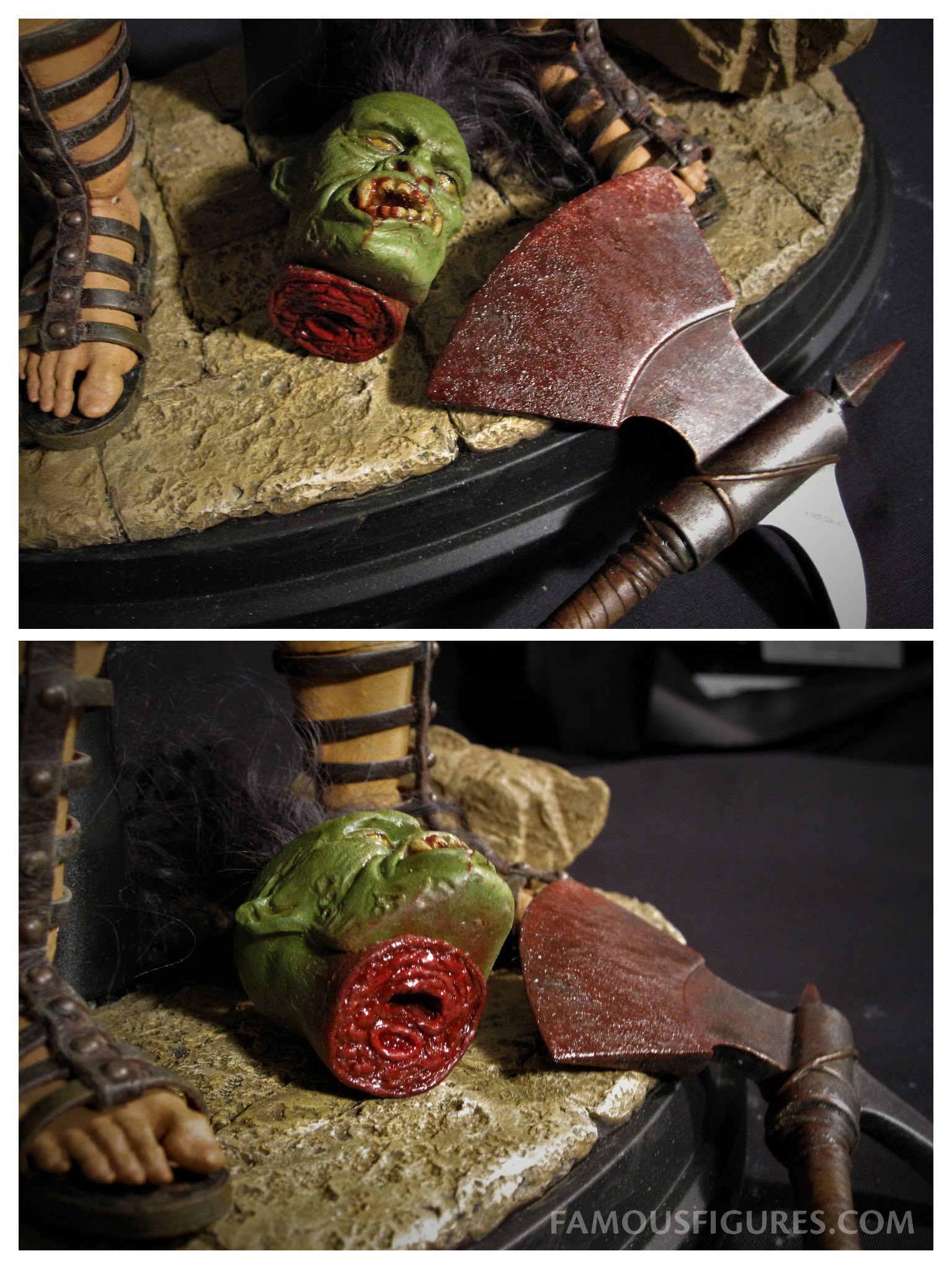 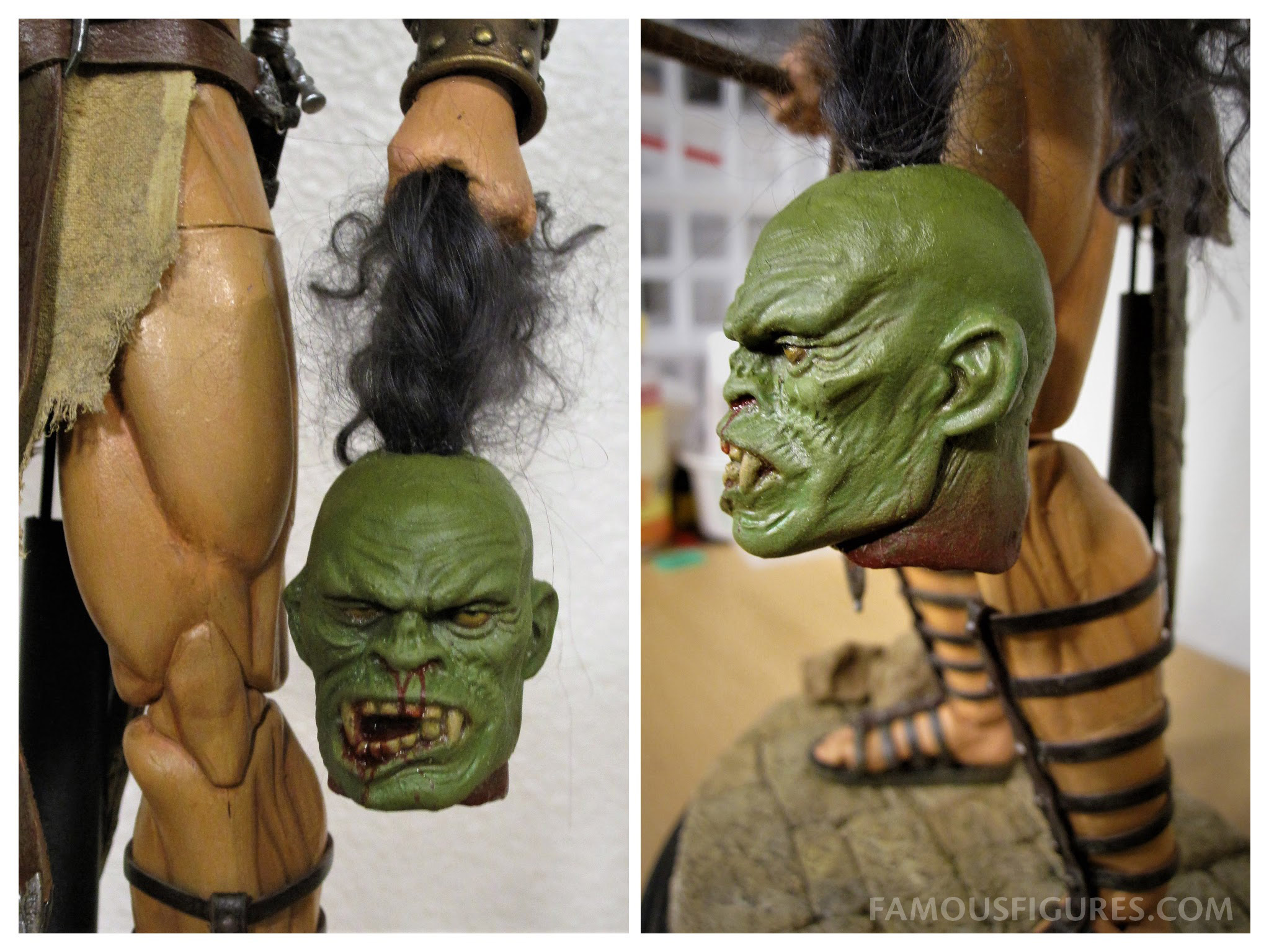 Body – DCD Dr Manhattan chest & legs, ACE waist, Marvel Icons Wolverine shoulders & biceps
– Sculpted: Forearms, neck, traps, nipples
– Feet are 3d printed, ankles are the shoulders from a 6″ wrasslin’ figure (this creates marvel legends-style rocker ankles)
– Hands are from Enterbay NBA ballers. They’re big but don’t have gripping hands, so I drilled a hole into a fist and resculpted the fingers around it.

Loincloth – Made from white cotton, dyed, cut & weathered, with an elastic waistband

Base – Sculpted from pottery clay 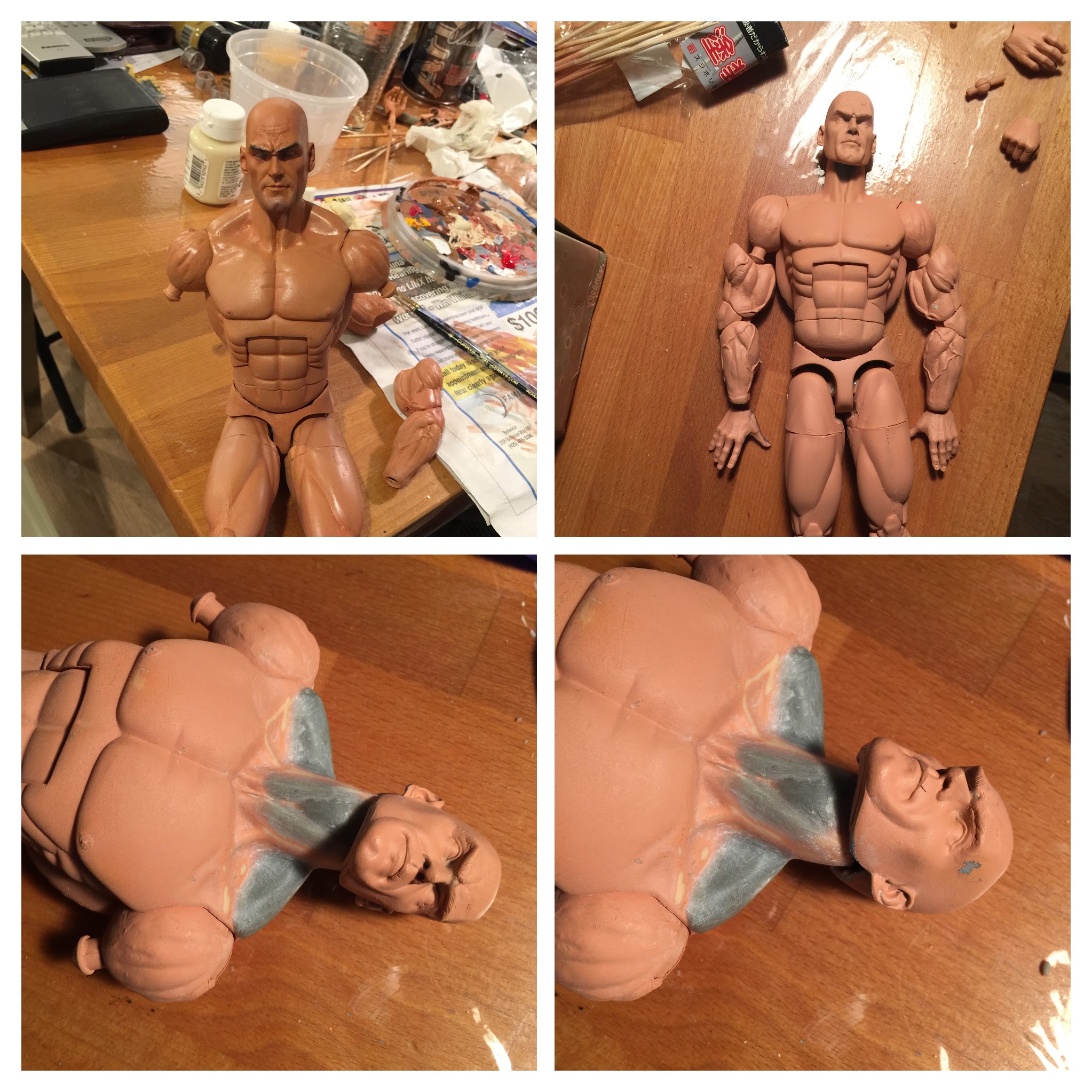 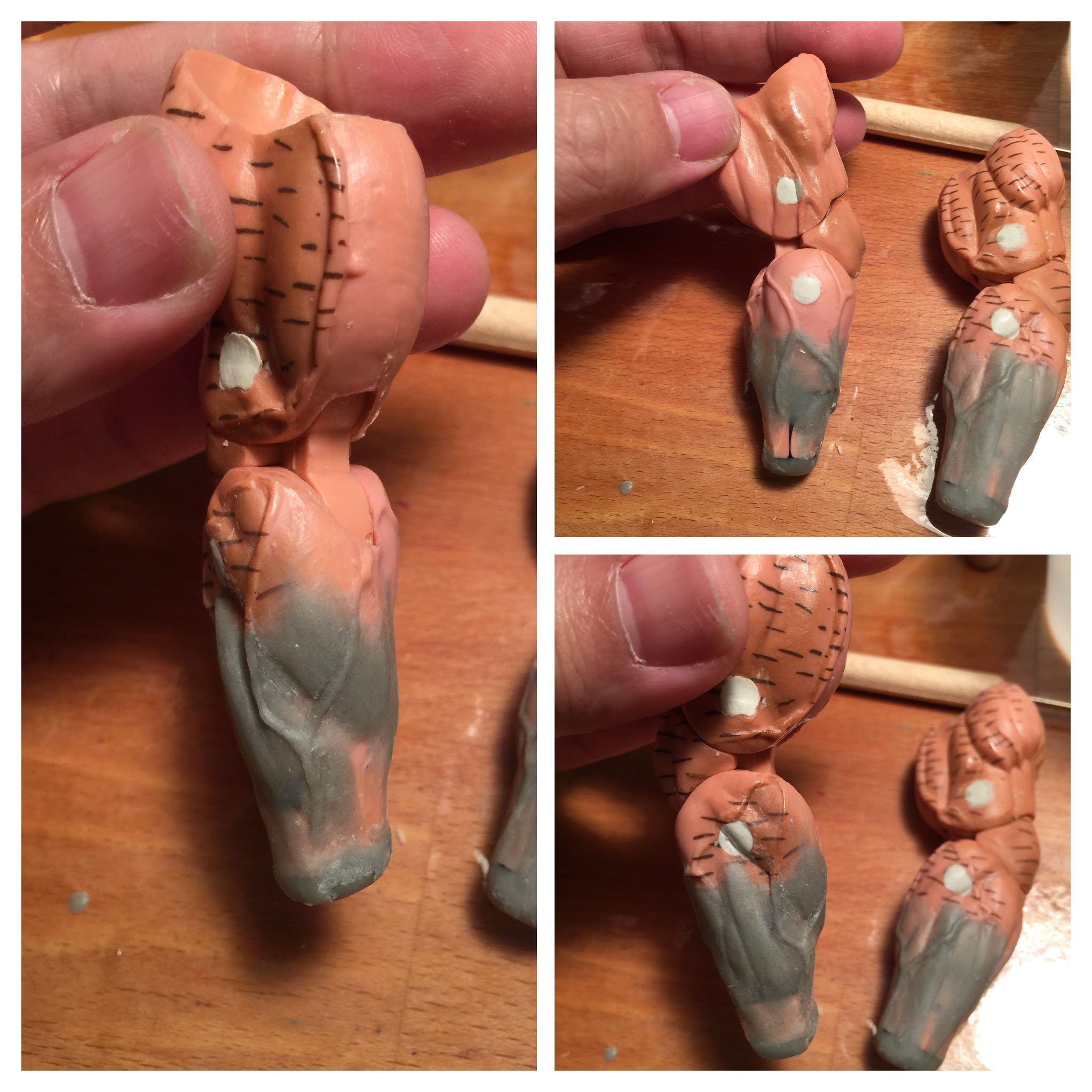 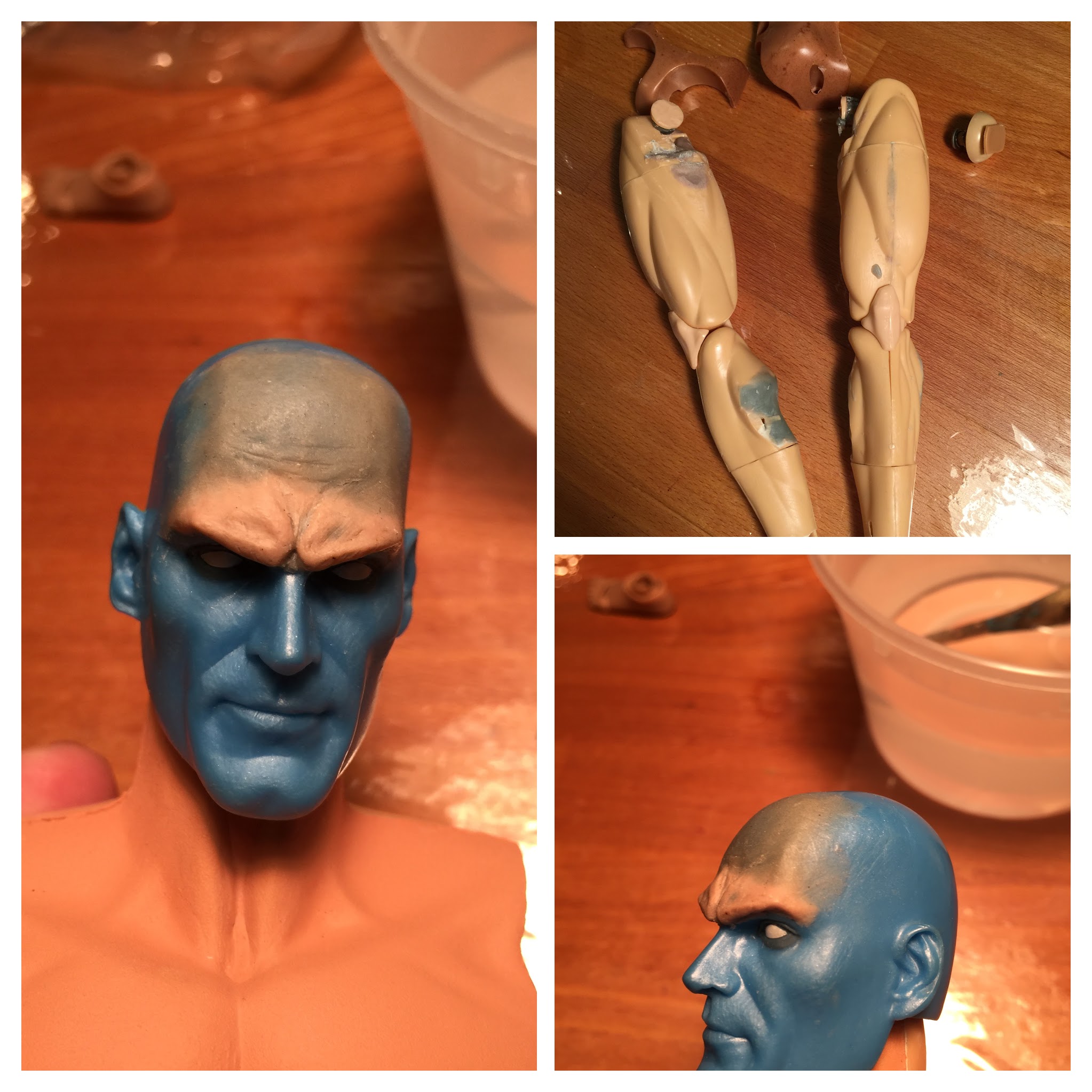 DCD feet were too small, so I replaced with 3D printed feet (which were also much better sculpted). Added shoulders from a 1:12 WWE figure to create Marvel “rocker ankles”. Sandal bottoms are the bottom of a 12″ wrestler figure’s boots: 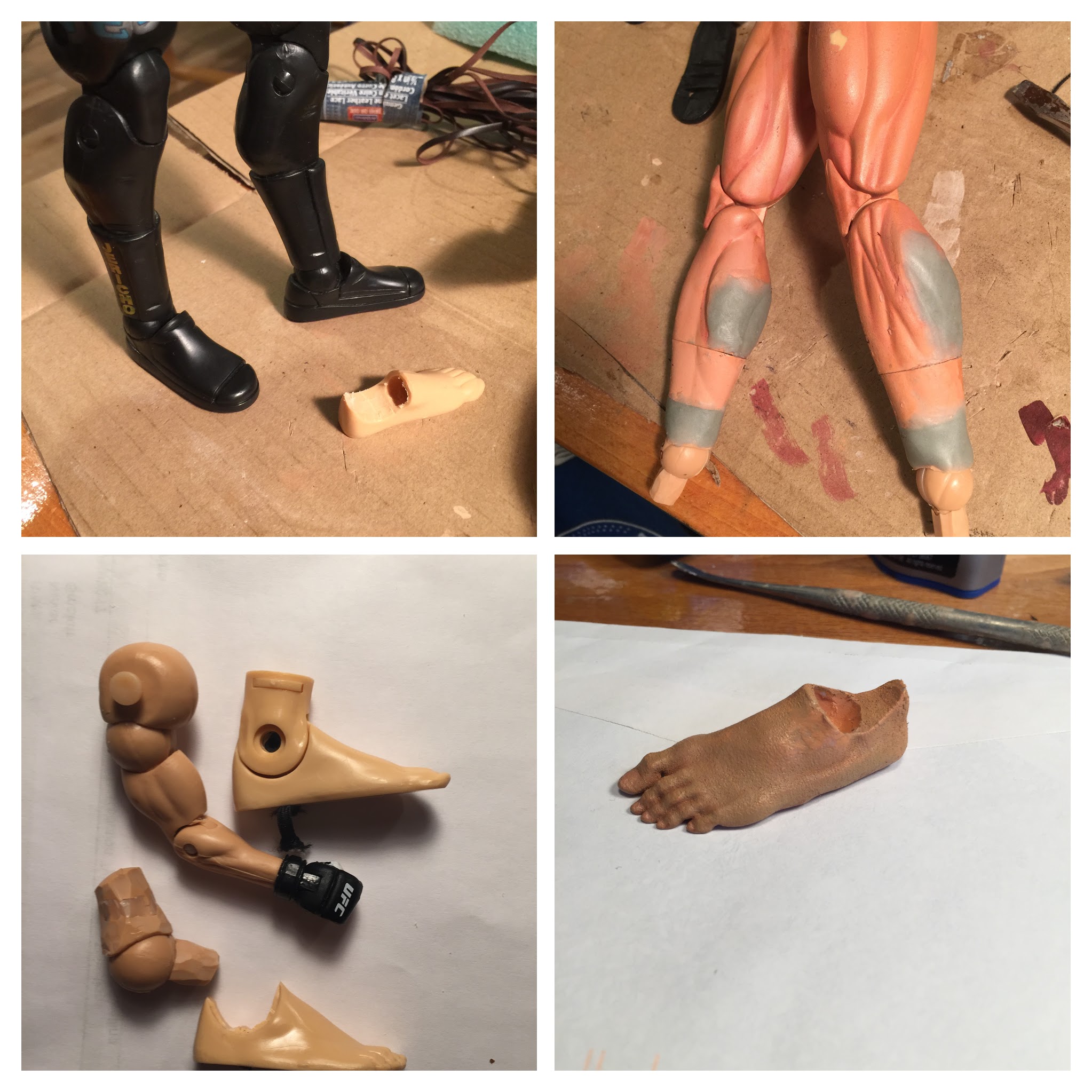 Many variations on the kidney belt and loin cloth design were tried: 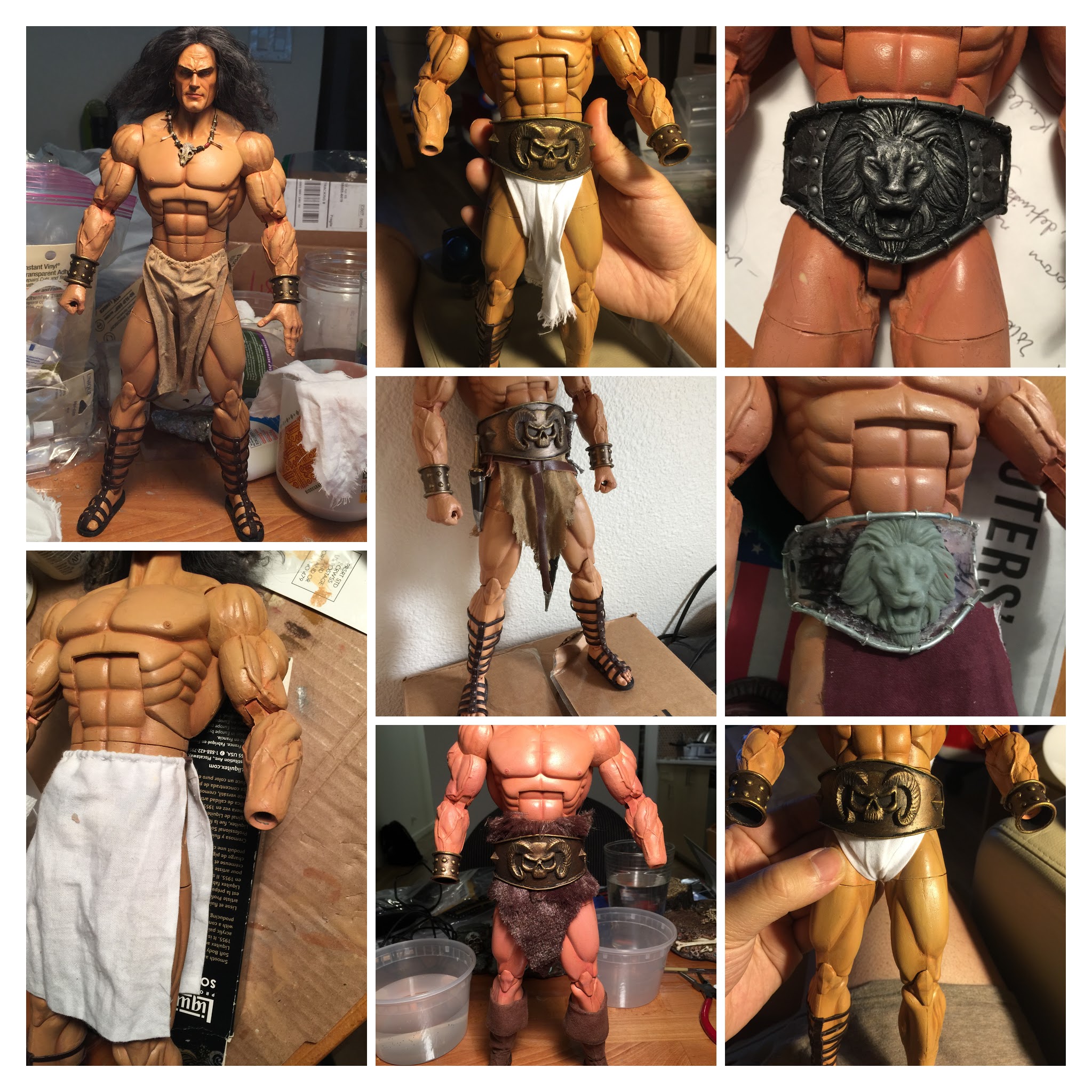 Demon head from original to v1. I felt the wide open eye was too cartoony, so I sculpted a more closed eyelid onto it eventually: 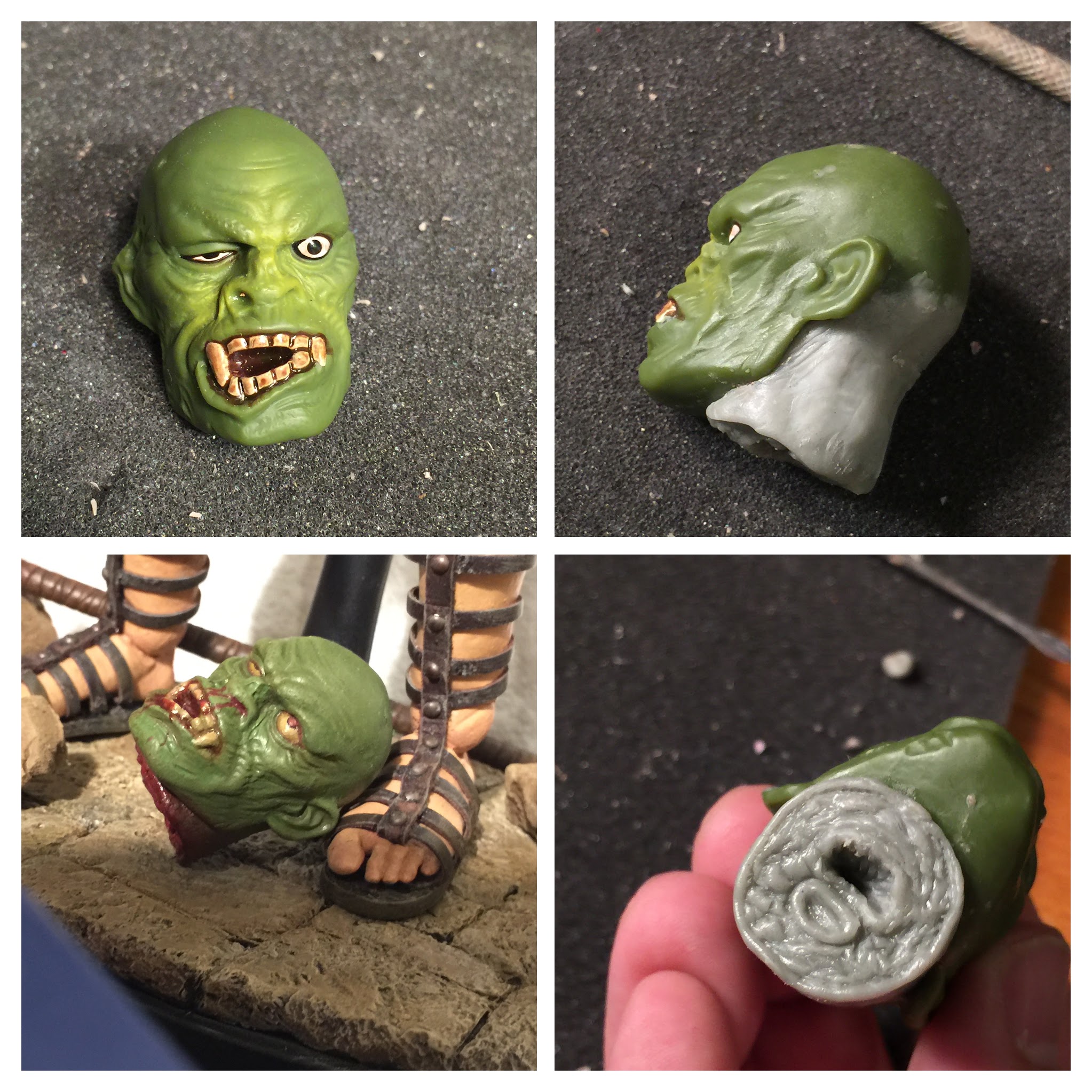 My first time sculpting stonework and first time using regular clary. It was actually quite fun, though regular clay shrinks a LOT when it’s dry. On the plus side, it holds detail better than anything I’ve seen: 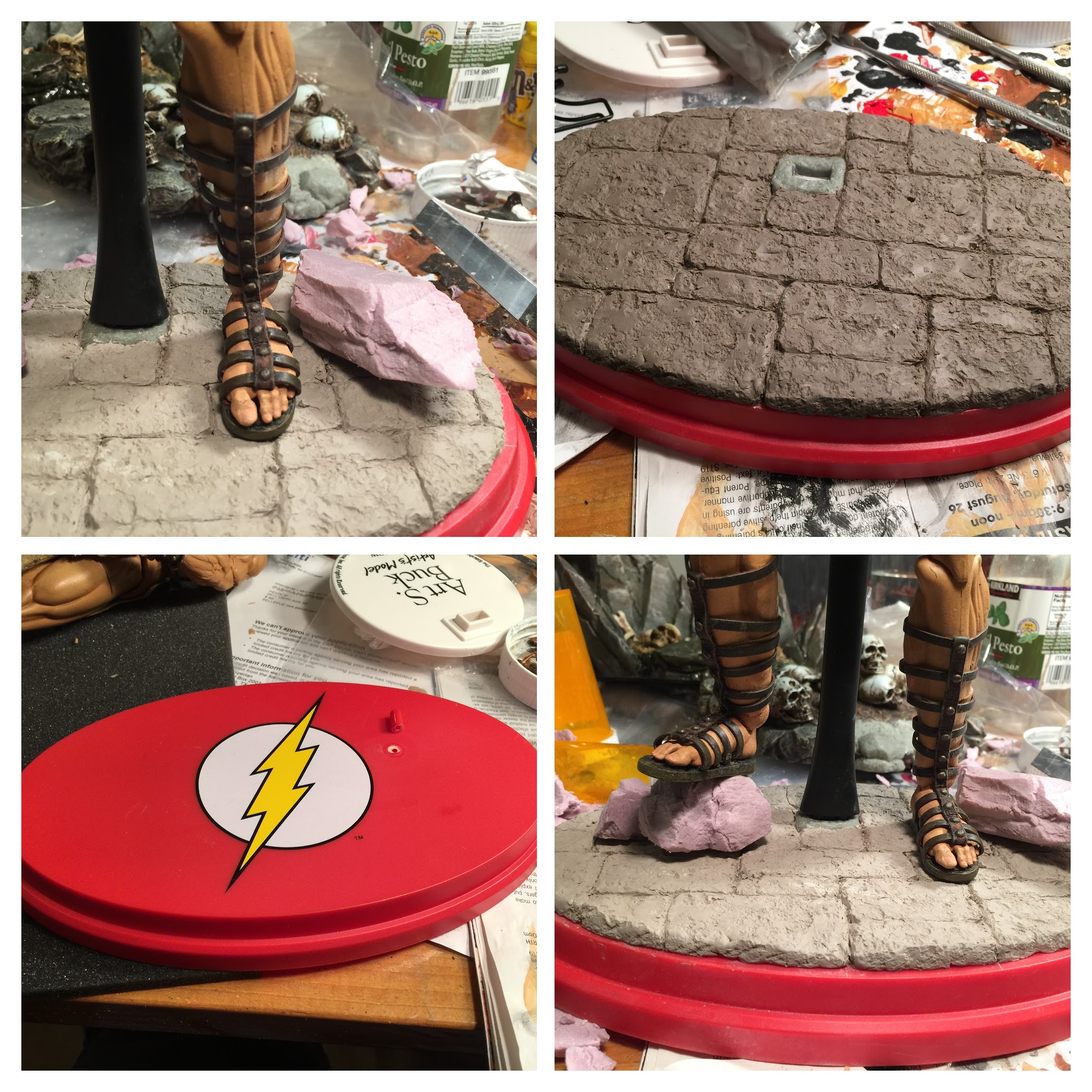