Here’s a simple custom figure of Daniel Craig as James Bond 007 in the finale of Casino Royale (or opening of Quantum of Solace).

Even though Quantum of Solace is supposed to pick up immediately from the ending of Casino Royale, the filmmakers changed suit providers between films, so the style of Bond’s suit actually changed. I’ve chosen a 1:6 suit that is a hybrid of both: 3-piece dark navy pinstripe like from Casino Royale, but with a very fitted, modern cut like from Quantum.

The “lake cuomo villa steps” stand / base is the very first base I ever sculpted, even before the Conan the Barbarian base I posted over a year ago. I was never happy with it (the steps are too curved), but it’ll do for now. I still need to add a Casino Royale label onto it!

The HK UMP weapon is made from Dragon Models parts, then given a repaint. I’m pleased with how the metallic texture came out on the silencer, but not so much the body of the weapon. I know the body is supposed to be a polymer, but without the metal effect it just comes out looking plastic toy-like.

And finally, here it is on my shelf of suited killers. I think it’s time to get more shelves..

Here’s a custom figure of Frank Castle aka The Punisher from the superb PUNISHER MAX comic series. I wanted to emulate artist Goran Parlov’s highly-detailed “cartoony yet serious” art style. Parlov also gave The Punisher a stripped down, hulking and weather beaten look. It’s a nice contrast to The Punisher’s usual look where he’s loaded down with weapons and gear.

I first posted this figure in 2010, but reworked it over and over until 2013. Needless to say, a lot of customization went into this 1:6-scale figure. The head is from DC Deluxe Green Lantern, but shrunk down slightly and with newly sculpted hair. The body is a combination of Marvel rotocast figures and DC Deluxe arms, plus a lower body from DID. The shirt is handmade and sprayed, while the jeans were dyed black and weathered. The M60 machinegun is an old 21st Century Toys or Barrack Sergeant piece which was repainted and weathered. 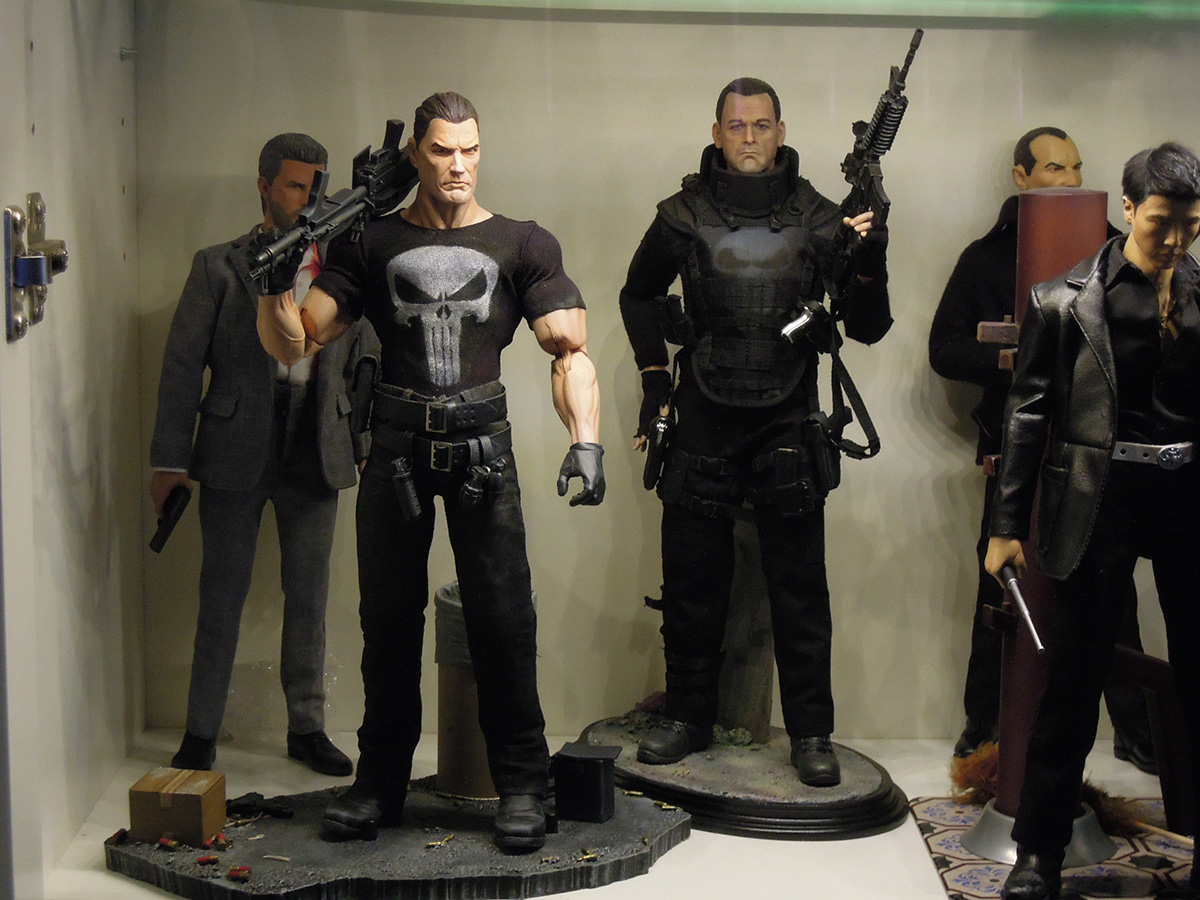 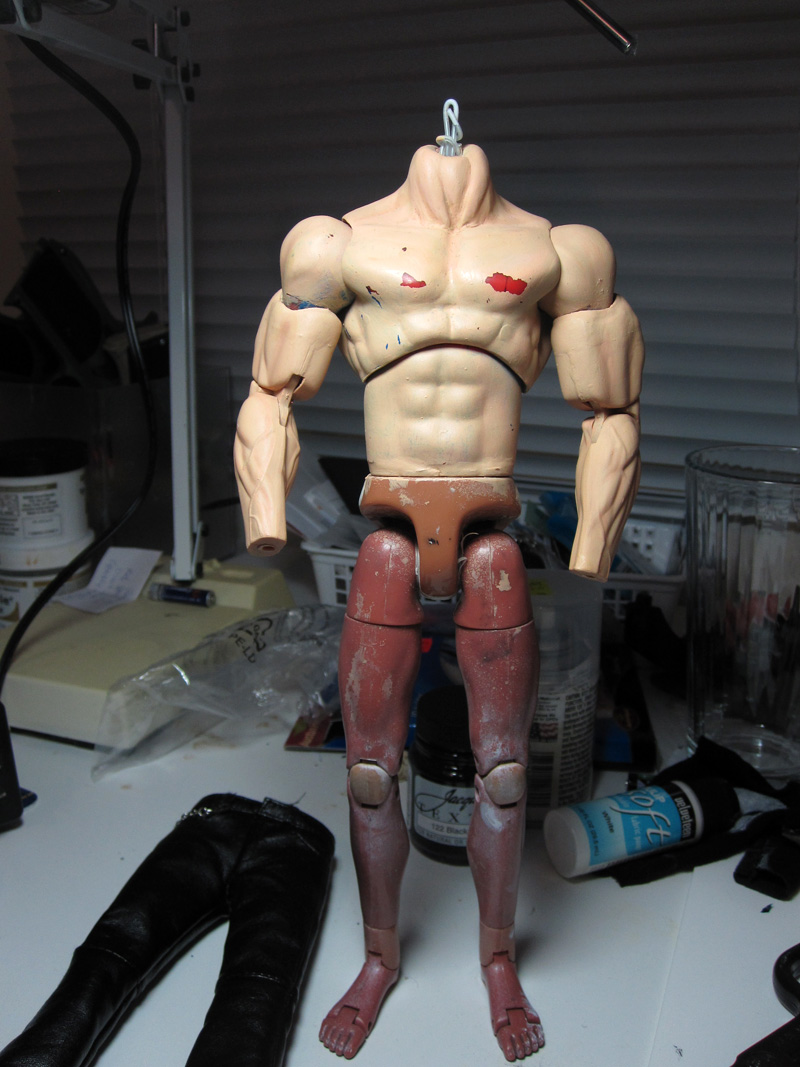 George Clooney’s first major Hollywood film was also one of his best: 1996’s From Dusk Till Dawn co-starring Quentin Tarantino and directed by Robert Rodrigues (Desperado, Sin City).   I’ve wanted a 1:6 scale action figure from it ever since I saw it – over 15 years ago!  My skills and the availability of civvie parts in this hobby have both finally progressed to the point where I can create a figure that doesn’t look like total crap.   I find it surprising that 1:6 manufacturers still haven’t created a great George Clooney sculpt.  For my custom figure, I used a head from an old Three Kings headsculpt set and customized it to look more like the young Dusk Til Dawn Seth Gecko Clooney.   It could still be better, but it will have to do for now.

Apologies for the vanilla pix. One day I’ll make a base for this and try to shoot something tricked out as is the fashion now.

Finally found some time to work on figures. I wanted to practice my blonde hair painting technique as I find that hair colour very hard to capture.

Both of these happen to be Feng headsculpts released commercially with terrible paint jobs. I stripped the paint off and repainted with Liquitex acrylics (truly loads better than the cheap craft paints – Try them). Feng’s sculpts can border on caricature, but to me that just gives them more character and feel than other more accurate but conservative portraits.

First up is 12″ action figure of Daniel Craig as James Bond in Quantum Of Solace.  The original head sculpt came from the Toys City Gestapo 12″ figure set.

Second is Leonardo DiCaprio as Danny Archer in Blood Diamond. The headsculpt is from the Toymaster War Journalist 12″ figure set. The eyes are moveable and I almost destroyed them painting, stripping and repainting them 4 times (seriously). In the end, the eye paint ended up looking almost the same as the factory eye paint.

He still needs weathering and a weapon upgrade courtesy of Subway’s 24 Hero set (can’t wait for that fig).